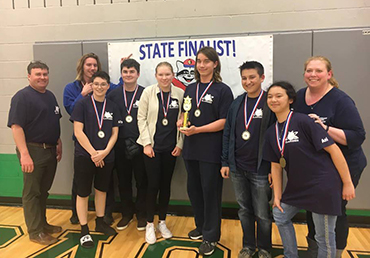 Southlake, TX – March 6, 2019 – The Clariden School, a North Texas leader in accredited, private PreK – High School STEAM education, today announced that their high school team took 1st place at the Odyssey of the Mind 2019 Regional Tournament in their age division (Division III). The middle school team took 3rd place in their age division (Division II) and received an Omer Award for sportsmanship. Both teams will advance to the State Tournament scheduled for April 6, 2019 in the Houston area. The Odyssey of the Mind Competition is reported to be “the largest international creative problem-solving competition worldwide.” (https://www.odysseyofthemind.com) 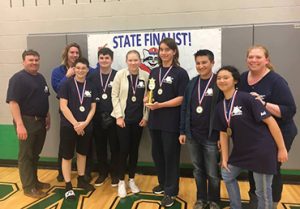 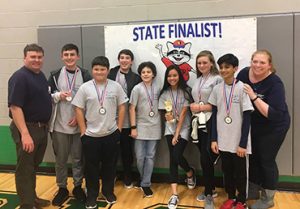 Clariden competed in the Odyssey of the Mind Regional Tournament on February 23, 2019, held at Carroll High School in Southlake, Texas. The competition involved fifty-nine registered teams from schools across North Texas. This was Clariden’s third year participating in the tournament. Odyssey of the Mind is a club activity for students at Clariden.

Teams select one of five problems published by Odyssey of the Mind organizers. Both Clariden teams chose Problem 1 in which they had to build a self-powered vehicle that could: Transport a student on multiple tasks, fit inside a suitcase, and be assembled, disassembled and reassembled – all in under 8 minutes. The actions all had to be delivered in a story format including costumes, acting, sets, and more. The teams worked for seven months creating and building their vehicle and components.

Clariden’s middle school team won an OMER Award for their sportsmanship and forethought. An OMER Award “recognizes those individuals, coaches, team members, parents, officials and others who, during a tournament, serve as exemplary examples or role models through their actions or words. This award is also bestowed on team members who exhibit exceptional skill and talents. Each recipient of an OMER’s Award receives a special medal,” states the Odyssey of the Mind’s website. (https://www.odysseyofthemind.com/wf2017/awards-and-ceremonies/?)

“We love to see our students’ creativity and engineering skills rewarded. Seeing an added award for their good character tells the fuller story of what makes Clariden stand apart,” commented Sallie Wells, Head of School for The Clariden School. “Special thanks to Coaches Brady Warner and Rissa Westerfield for volunteering to coach our team and to our amazing Clariden students!”

The Odyssey of the Mind State Tournament will be held April 6, 2019 at Waller High School, Waller, Texas. Clariden will compete against the top teams from across the State of Texas. 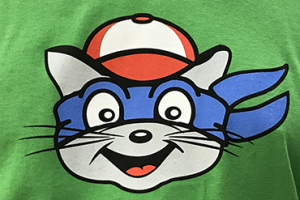 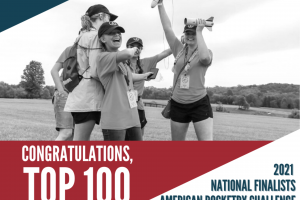