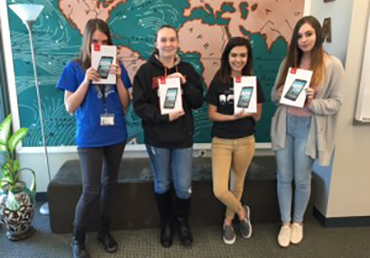 Four Clariden students were recently named Best in State Winners in the Verizon Innovative App Challenge.  The nationwide contest challenged middle and high school students to come up with a mobile app idea that would help solve a problem within their community. Over 1200 app ideas were submitted nationwide and Clariden’s team was named the 2015-2016 Best in State winner in the high school division.

Verizon specifically challenged teams to find a need that affected someone within their personal community. After a quick brainstorming session, the girl’s team, comprising of Cian Hillis, Caroline Morris, Hannah Warner and Skyler Wicke, decided to help one of their own. “We thought of the idea almost immediately,” says Hannah Warner. Skyler Wicke, a tenth grade student, was diagnosed with juvenile arthritis when she was in elementary school. In a video the team created for the challenge, Wicke states that many students “live with daily pain and altering disabilities. Many of them look perfectly healthy and they wonder if anyone understands what they are going through.”

To combat this problem, they developed a mobile app idea called Chronicare. The app would allow those who suffer from a chronic illness to chart their symptoms, connect with others who suffer from the same disease, research doctors and other health professionals who can help them, and create reminders to take medications if needed.   Wicke states “That’s the goal of Chronicare (is) to bring awareness and support for people suffering with chronic diseases just like mine (and) to help them through their lifelong invisible struggle.”

When asked about what she liked most about the contest, Caroline Morris replies, “I liked researching about chronic illnesses and learning how many people are affected by them. There is a broad range of people who suffer from them.”

Because they were named Best in State winners, each student was awarded a mobile tablet along with a $5000 grant for their school making them eligible to compete in the Fan Favorite People’s Choice Challenge. Winning the People’s Choice Award would bump them up to the next round where they compete for a $15,000 prize , the opportunity to work with MIT experts to build their concept into a working app, and an all expenses paid trip to the Technology Student Association conference in Nashville, TN in June of 2016.

The team is looking forward to competing again next year. Warner adds “It was fun being on a team and coming up with different ideas for the app.”