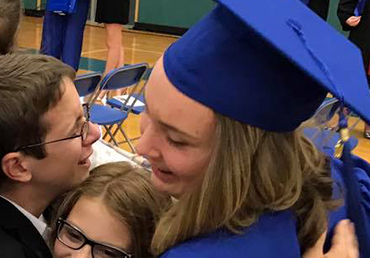 I was doing some research the other day on the SAT that is used for college admissions. One of the data points, stated “the average SAT score by school type”. I knew that students that attend private schools do better on the SAT than students who attend public school but I did not know that students who attend independent schools (like Clariden) do better than students who attend religiously affiliated schools. Here’s what was reported by Total Group Profile Report 2016 (uses the old 2400 point scale – the 2017 report did not release information on school type).
Clariden’s 2016 average SAT: 1715
As stated in the report, “As you can see, students at independent schools have the highest averages, then religious private schools, then other or unknown schools, and finally public schools.”
Clariden graduates have done extremely well on their SAT and ACT testing and have been offered big scholarship money. Just last year our three graduating seniors (combined) were offered over $425,000.00 in scholarship funds. For our seniors this year, I anticipate more of the same. Just today, Skyler found out that the University of Arizona has accepted her and awarded her $32,000 annually in scholarship money. That’s just one of many offers that I anticipate will come in for her and for our other seniors.
But does having solid SAT/ACT scores mean that students are prepared for the work at college? This week I received an e-mail from Caroline, a 2017 Clariden graduate who graduated last May. She okayed me to share her words: “Hi Mrs. Wells! It’s Caroline! I just wanted to let you know that college is going great…college writing is kind of easy after Mr. Garrett’s class. I need to e-mail him too and tell him how much he’s helped me. He’s always had really high standards in his class but honestly, I think it’s made a world of difference…I think that things I’ve learned at Clariden were invaluable. I feel like everything comes pretty easily to me because we covered so many different things and I have a background in everything from engineering, to marketing, to architecture…I miss you and everyone so much…I like college…but I still feel like Clariden is home.”
Caroline is not the only graduate from Clariden that has shared with me that college has gone or is going well for them because of what they learned while at Clariden. The messages I’ve received and the data published confirm what I’ve always believed to be true – Clariden is an incredible learning environment with exceptional educators. Being an independent school allows us great freedom to teach and educate without restrictions, which in the end best prepares students for life after high school.
— Sallie Wells, Head of School
Categories: Letter from Head of School
| Tags: college prep